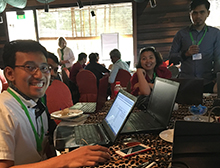 Conservationists, wildlife biologists and other experts converted on Singapore Zoo this week for intensive scrutiny of what is known of the freshwater turtles of the Indian subcontinent, South East Asia and New Guinea. They paint a sober picture, with many species moving to vulnerable or from vulnerable to endangered, or from endangered to critically endangered.

Turtles and tortoises are in trouble world-wide from a combination of habitat modification, principally forest degradation and loss, dams and weirs, water extraction for industry, agriculture and urbanization, introduction of exotic competitors and predators, human offtake at unsustainable levels, and genetic pollution. Their state is particularly perilous in one of the hotspots for turtle and tortoise diversity, southeast Asia.

Most of the turtle species of Laos, Cambodia and Vietnam are on a steep trajectory to becoming critically endangered, the step before extinction. They are in an insidious position because the rarer they become, the greater prices they fetch until their value becomes irresistable to local people who are cash poor.

My focus and contribution has been on the freshwater turtles of New Guinea (we have no tortoises), and despite some disturbing trends in the wrong direction, they are not nearly in as dire a state as their counterparts to the north. Their remote location and the lack of adequate transport networks have saved their bacon ... at least for now. The commercial machinery that feeds the insatiable Chinese demand for turtle meat, medicinals and pets has a long reach, but not quite so far as New Guinea.

Having said that, it was disappointing to learn that the Rote Island long-neck, Chelodina mccordi, is now considered extinct in the wild, driven there by poaching for the pet trade, and hanging on only in Timor Leste in the form of a distinct residual lineage.

Carettochelys insculpta, the pig-nosed turtle, that has suffered dramatic declines in PNG from increased harvest for local consumption, is also being heavily exploited for the international trade in Indonesian Papua. But thankfully, there are moves to regulate the trade.

The harvest is restricted to the eggs, which is arguably the life history stage that has least impact on the viability of the species. Eggs are collected by the local people, incubated in artificial nests to hatching. Half the hatchlings are released, and the remainder enter the trade. A small animal in good health can still attract about $US30 by turtle fanciers, and so is an attractive proposition to those willing to take the effort to get them to market.

It is a double-edged sword, but it is difficult to deny the local communities of an opportunity to generate income. The challenge is to do it in a sustainable fashion, and that takes engagement and joint commitment to management.

The short-necked chelid turtles, which comprise the New Guinea painted turtle Emydura subglobosa (found also on the tip of Cape York, Australia) and the trio Elseya novaeguinieae (Birds Head), E. schultzei (north New Guinea) and E. rhodini (south New Guinea) are of Least Concern because of their abundance and widespread distributions, and absence of clear threats. Not so Elseya branderhorsti which has been unfortunately blessed with a pure white plaston that makes it particlarly valuable for the production of naturopathic medicinals. That, and its restricted distribution has led to an assessment as Vulnerable. 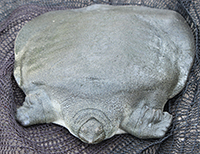 The two giants of the New Guinea freshwater world, the softshell turtles Pelochelys bibroni and Pelochelys signifera are vulnerable because of the size and the flavour of their meat which makes them particularly sought after. They fetch a substantial price (around $100) even in the local markets.

So for the moment, none of the freshwater turtles of New Guinea are at imminent risk of extinction, but that is no basis for complacency. The long arm of the illicit trade in wildlife can move quickly and dramatically change the situation should avenues for transport in particular open up.

It will be interesting to see how much things change between this assessment and revisiting the issue in 10 year's time.