The Hidden Sex Life of the Jacky Dragon 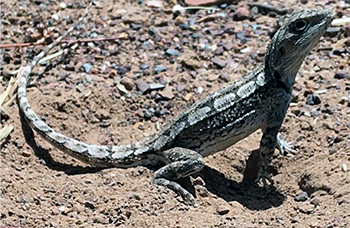 Sex in dragons can be a complicated affair. Some have sex chromosomes that determine the sex of their progeny. In others the sex of their progeny is determined by the thermal environment of the nest in which the embryos develop. This is known as temperature-dependent sex determination or TSD. In one dragon species with sex chromosomes, genetic sex in the embryo is over-ridden if the nests become too hot (or too cold in one skink species). These embryos sex reverse in the nest.

Sex reversal has been seen as quite distinct from TSD where any underlying propensity to be one sex or the other is thought to be polygenic, that is, to involve the combined effects of a number of genes scattered across the chromosomes, not organised into sex chromosomes. But there has always been a sneeky suspicion that some TSD species at least might have cryptic sex chromosomes, and so they are really cases of sex reversal, not TSD.

In a recent paper in the Proceedings of the Royal Society of London (Proceedings B), Sarah Whiteley and her colleagues present some tantalizing evidence that this species has an underlying predisposition to be one sex or the other, a predisposition that is over-ridden at extreme incubation temperatures.

Ovotestes are organs that have not made up their mind. Rather than becoming a testis or becoming an ovary, they sit poised, their fate undecided, at a critical stage in embryonic development. In the Jacky Dragon, ovotestes were observed at all three incubation temperatures (24°C, 28°C and 34°C) and across a wide range of developmental stages. However, ovotestes were observed more frequently at 24°C (n = 4 of 11, 36%) and 34°C (n = 5 of 11, 45%) compared to the moderate incubation temperature at 28°C (n = 2 of 14, 14%). This suggests that, at the extremes of temperature where predominantly female progeny are produced, sex reversal via an intermediate developmental condition, the ovotestis, is occurring. We propose that ovotestes in the Jacky Dragon arise from antagonism between genetic and thermal influences on sex.

The interaction between genes and the environment in reptile sex determination remains poorly understood, which provides many compelling avenues for future research. The Jacky Dragon emerges as a particularly important study species to identify the nature of genetic mechanisms influencing sex that is otherwise under thermal control, such as evidence of cryptic sex chromosomes.

Read more about this in the published paper: