Next-Generation DNA Sequencing is going to be brought to bear on wildlife trafficking for Australian freshwater turtles thanks to a grant to Matt Young from the Holsworth Wildlife Research Endowment Fund.

Dr Bill Holsworth is a renowned ecologist, mammalogist, wildlife biologist and philanthropist. In 1989 Bill and his wife Carol established the Holsworth Wildlife Research Endowment to fund grants to universities for postgraduate students in fauna and flora. 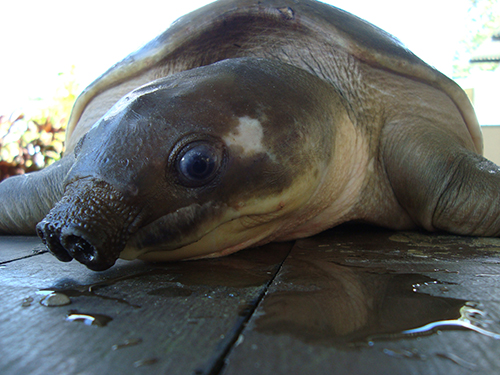 Conservation of rare and threatened native species requires effective wildlife management through defining management units and threat mitigation. Wildlife trafficking is of concern for Australia’s rich and unique reptile fauna, which are the predominant target of Australian wildlife crime.

The pig-nosed turtle(Carettochelys insculpta) is a rare freshwater turtle native to the Northern Territory and southern New Guinea, classified as threatened by the IUCN, frequently trafficked through illicit markets of South East Asia, and harvested by indigenous peoples from across its distribution. Identifying management units and developing sensitive and reliable forensic methods is critical to prevent, or at the very least manage, wildlife trafficking and harvesting related to population declines of Australian freshwater turtles.

The advent of Next-Generation Sequencing technology has enabled the generation of volumous genetic data at low cost, and has improved sensitivity over traditional morphological species and population identification for geographic origin assignment. Genetic geographic origin assignment is a wildlife forensics method based on identifying an organism’s reproductive population of origin, simultaneously assigning an organism to a population, while excluding it from others.

The aim of this research project is to define population management units for Carettochelys and develop a genetic geographic origin assignment test for this species and other Australian turtles. This three year project will address three specific objectives: (i) to determine if behavioural adaptations exist in Carettochelys, particularly natal homing, that may subdivide populations; (ii) to define management units or stocks for Carettochelys, to guide management focus spatially; and (iii) to develop genetic geographic assignment tests for Australian freshwater turtles generally.

Funding obtained through the Holsworth Wildlife Research Endowment will increase the impact of this research project by enabling us to conduct fieldwork in Australia and generate genetic data for all research objectives. Congratulations Matt on securing this valuable support.