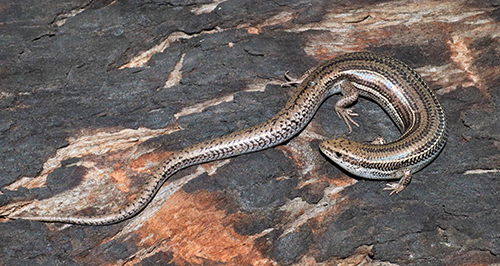 See our latest PodCast on this research.

The alpine skink Bassiana duperreyi has XX/XY chromosomes like us, but unlike us the females can be converted to males in the egg by low temperatures. In a paper that appeared today in Heredity, Dumie Dissanayake shows that the frequency of sex reversal varies along an elevational gradient, and that the resultant sex ratio skew will potentially drive the loss of the Y chromosome at the highest elevations. Interesting stuff.

Most species in the animal kingdom rely on sexual reproduction to perpetuate their species. Sex determination, the decision of the developing embryo to become male or female, of is achieved via two main mechanisms. In genotypic sex determination (GSD), sex is determined at the time of fertilization by the complement of chromosomes and genes passed to the offspring by mother and father. If the Y chromosome is inherited from the father to complement one of the X chromosomes from the mother, then the baby human is a boy. If the father's X chromosome is inherited, the baby human is a girl.

Sex, the reason for having two sexes, and the means by which it is determined has intriqued thinkers and scientists for centuries. What a surprise then to find, about 50 years ago, that sex in some reptiles is determined not by genes, but by the temperature experienced by the embryo during incubation – temperature-dependent sex determination (TSD).

The story does not end there. Some species have sex chromosomes, but they are over-ridden by incubation temperatures, in the laboratory and in the wild. Sex of the Australian eastern three-lined skink is reversed by low temperature during incubation of their eggs. Individuals that are XX and normally destined to become females are reversed to males.

Facinated by this, we examined populations of this little lizard along an elevational gradient from the seasonally snow-covered Australian Alps down to the coast of Victoria. Our paper published recently in Heredity found that the highest frequency of sex reversal occurred at alpine locations and decreased in frequency to zero with decreasing elevation. We also show that, as the frequency of sex reversal occurs, populations risk jettisoning the Y chromosome as they evolve to achieve parity in the phenotypic sex ratio. If this occurred, as is likely in isolated populations at the highest elevation sites, the populations would transition from GSD to TSD.

Current climatic change has significant impacts on several aspects of the biology and ecology of many reptile species on earth, which in some cases can lead to catastrophic population declines. Changing environmental temperature is increasingly considered a significant threat for reptiles with TSD. Our work on sex reversal published in Nature and now in Heredity, indicates that GSD species may also be impacted, if temperature-induced sex reversal is more common that indicated by the two species so far demonstrated to exhibit this trait, the dragon Pogona vitticeps and the alpine skink Bassiana duperreyi. This research provides added focus for on-the-ground management strategies to mitigate the effects of climate change on local populations.