Unlike mammals, most birds and reptiles (birds are reptiles after all) have a series of very small microchromosomes in addition to larger macrochromosomes. These microchromosomes were considered to be largely irrelevant in comparison to the role played by the macrochromosomes, and a mammal-centric view had them as on the sidelines of genome organization. Then came the studies of chicken that showed that the microchromosomes are gene rich and contain far fewer repetitive sequences than the large macrochromosomes. Clearly they have a major role in contributing to the blueprint that is the genetic code for chicken.

A recent paper appearing today in the Proceedings of the National Academy of Sciences (PNAS) led by Jenny Marshall Graves as her inaugural contribution as a new member of the Academy, takes a closer look at microchromosomes taking advantage of the latest long-read sequencing technologies and chromosome conformation scaffolding (HiC). There are now a number well-assembled end-to-end chromosome-scale genome assemblies now. Paul Waters of UNSW and Hardip Patel of ANU weaved magic (and consumed enourmous computer resources courtesy of the National Computational Infrastructure -- NCI) to align these assembilies to deliver the results reported in this paper.

In the paper, we show that the level of homology between the microchomosomes of non-mammalian vertebrates generally is exceptionally high. Emus are only distantly related to chickens, as far as birds go, but they have virtually the same chromosomes. Comparing emus, turtles and squamates showed a high degree of homology in microchromosome DNA sequence that must have been conserved over the 300 million years since these species last shared a common ancestor. 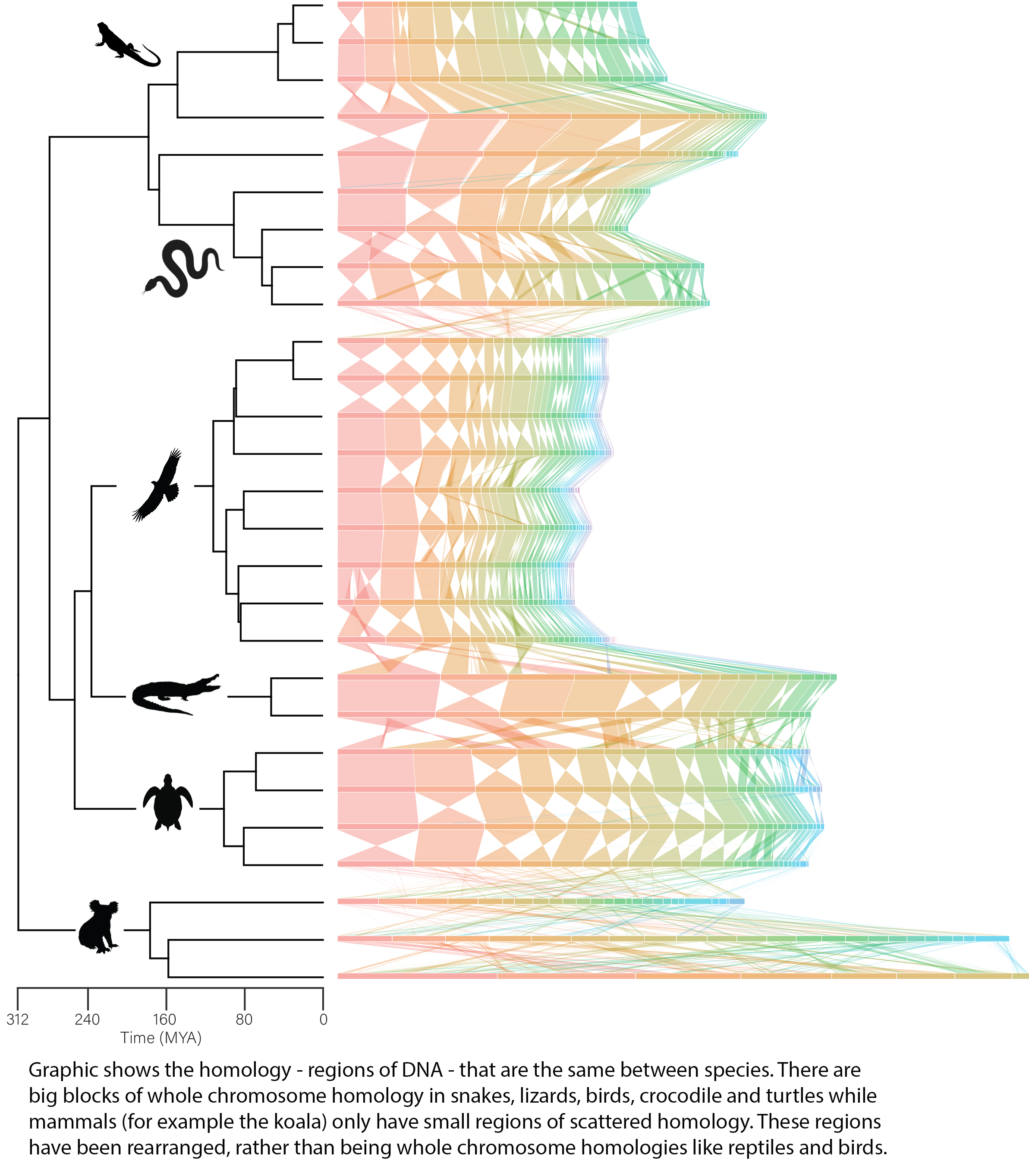 What is truely astonishing (again, at least to me) is that the microchromosomes of Emu show strong homology even to the 19 chromosomes of Amphioxus, a lineage that branched off from the chordates before the vertebral column evolved. Amphioxus has a very small genome (520 million base pairs) organised into 19 tiny, gene-dense chromosomes, presumably present also in the common chordate ancester of the vertebrates. This genome was duplicated once probably twice during the evolution leading to animals with four limbs (tetrapods). What is remarkable is that one set of these Amphioxus "microchromosomes" has apparently maintained their segregation and homology with the microchromosomes of Emu (and other non-mammalian vertebrates) over those hundreds of millions of years since the Amphioxus lineage diverged from that leading to the tetrapods.

Of course there are exceptions to the rules, and the eagles among birds show much rearrangement of the chromosomes to obscure their contribution to the historical picture. I have not mentioned mammals.They have no microchromosomes. When emu sequence was lined up against the human and koala genomes (representing the marsupial and placental branches of the mammal family tree), only small patches of homology with microchromosomes were evident, scattered all over the genome. So rather than providing the backdrop against which we can interpret the evolution of vertebrate chromosomes, mammals appear to be the exception, with ramapant reorganisation of their chromosomes, and loss of the microchromosomes, to obscure the evolutionary history and stong level of conserved homology evident in the birds and reptiles.

This paper is worth a read even by those not central to the field. It shows how far we have come in examining the way genes are organised into chromosomes and how those chromosomes evolve over time to yield the wonderful diversity of life we see in the vertebrates of today. It shows how we are all the product of our evolutionary history, and not just recent history, but with a signature in our genome organization that goes back to the prevertebrate days of an Amphioxus-like ancestor.