Bower et al. 2019. Island of opportunity: can New Guinea protect amphibians from a globally emerging pathogen? Frontiers in Ecology and the Environment, esajournals.onlinelibrary.wiley.com/doi/pdf/10.1002/fee.2057

Earth’s sixth major mass extinction event has begun and amphibians in particular are in peril; over 40% of amphibian species are threatened with extinction. One agent in their demise is chytrid fungus Batrachochytrium dendrobatidis, responsible for the most widespread, disease-induced declines and extinctions in vertebrates to date.

New Guinea is the world’s largest tropical island and the last major center of amphibian biodiversity free from chytrid. In our paper that appeared this week in Frontiers in Ecology and the Environment, led by Deb Bower and Simon Clulow, we call for urgent, unified, international, multidisciplinary action to prepare for the arrival of chytrid in New Guinea, to prevent or slow its spread within the island after it arrives, and to limit its impact upon the island’s frog populations. The absence of the fungus in New Guinea offers an opportunity to build capacity in advance for science, disease surveillance, and diagnosis that will have broad relevance both for non-human animal health and for public health. 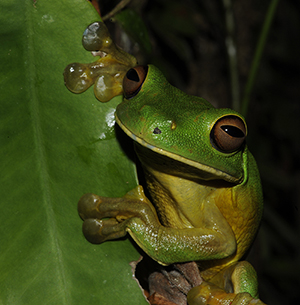 New Guinea is vulnerable to the introduction of chytrid because of its close proximity to centers in the Asian pet trade, as well as infected sites in both Indonesia and Australia. Rising levels of international commerce and cross-border movement of people elevate the risk of pathogen introduction, and tourism, logging, petroleum development, and mining increase access to formerly remote localities. Climatic modeling shows that large areas of the central highlands of New Guinea have climates favorable to the fungus.

Should we be concerned?

Fortunately, it will not affect our franking credits. However, many Australian frogs have declined since the 1970s because of chytrid and they have close evolutionary and ecological affinities with the New Guinean frog fauna, strongly suggesting that, as in Australia, dramatic declines will occur if the pathogen becomes established on the island.

Can we do anything to prevent froggy declines in PNG?

One might argue that attempting to prevent the spread of chytrid once it arrives in Australia is futile, as futile as our attempts to stem the tide of cane toads spreading across Australia's north. But there is a glimmer of hope. When global amphibian declines were first documented (in the late 1980s), scientists’ understanding of amphibian population dynamics was poor, the responsible agent had not been identified, and little was known about the host–pathogen interactions underlying many population declines. Two decades of research now provide a basis for improving management strategies for amphibian populations threatened by chytrid. 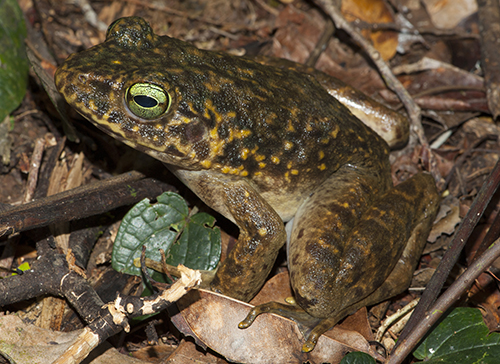 As we pointed out in our companion paper in Science, improved knowledge of host–pathogen interactions can now inform predictive assessments, researchers can now identify the most climatically suitable areas for the fungus and, on a finer scale, use ecological information to identify high-risk guilds to predict species’ responses. Much can be inferred from the Australian experience -- Australian chytrid impacts can be used to infer which species and frog communities will be more susceptible. By our estimates, 100 or more of the ~500 species in New Guinea are likely at risk of serious declines.

We identify five steps that can be taken to moderate the impact of chytrid if and when it makes its way to the island of New Guinea -- preparation, prevention, detection, response and recovery. I leave it to you to examine these in the paper itself.

Technologies are emerging to provide options for permanent recovery with the implementation of gene banking and translocation of disease-resistant animals, but these actions require investment and proof of concept, often on a case by case basis. Some populations afflicted by disease-related declines can recover over time, provided the chytrid infection is not so rapid as to push populations below viability thresholds. Management strategies to ameliorate the immediate impact on abundances can be simple, such as manipulating species or habitats to slow or reduce growth of the fungus (eg applying skin probiotics, translocating species, decreasing canopy cover). It is now possible to establish captive breeding of frog species, and gene banking a representative sample to preserve and store genetic diversity. So for some species, the catastrophies that occurred with some Australian frogs, when we knew less, may be averted. 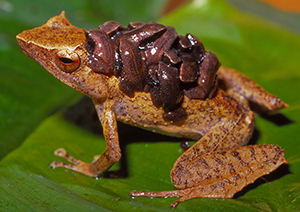 Biodiversity in New Guinea remains poorly documented, hampering accurate estimates of frog losses. Documenting the island’s amphibian biodiversity is critical for the development of the proactive, innovative, and experimental conservation measures that will be necessary should population declines begin.

The message from our paper is, given the likelihood, of chytrid’s eventual arrival to New Guinea, we need to assess the relative imperilment in order to set priorities for conservation action, quantify changes in frog communities to better understand and mitigate the pathogen’s potential impacts, promote biosecurity and education to reduce the transmission and spread of the pathogen once it arrives, and ultimately rescue frog populations and thereby preserving amphibian biodiversity.

Achieving this requires funding, planning, and early coordinated efforts by a dedicated task force, as well as the implementation of an active management plan following the framework proposed here. Our call to action is urgent!