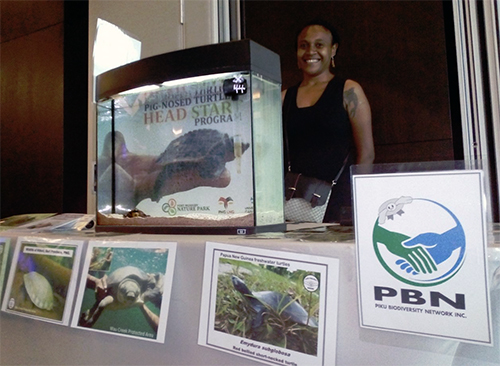 An exciting new NGO has emerged from the Piku program that has operated out of the University of Canberra since 2006.

The new NGO is called the Piku Biodiversity Network Incorporated (5-104750) or PBN for short. Its purpose is to promote and enable biodiversity conservation in Papua New Guinea through environmental education, community-led conservation and knowledge generation.

Public Officer Yolarnie Amepou elaborated on the move "Our sponsors gave us the lead -- they said it is time for this program to transition to PNG leadership, and we agreed".

The Piku Biodiversity Network was incorporated last week, and had the pleasure this evening of being featured at the PNG-Australia Alumni Association annual dinner.

"It is so great to have the PBN emerge from the Piku program with such fanfare", claimed the PBN Public Officer Yolarnie Amepou. The PNGAAA annual dinner had as guest speaker, Throwim Way Leg Tim Flannery (below), who earlier spent the day examining our little piggies at the Port Moresby Nature Park.

The Alumni Association decided to support the new NGO with a donation of PNG 10,000 kina, awarded at the dinner, to continue the activities of the PBN in the Kikori-Kutubu region. Yolarnie expressed her pleasure at receiving the donation by saying how thankful she was for the donation and "honored at the opportunity to meet and be introduced to this network of amazing people". 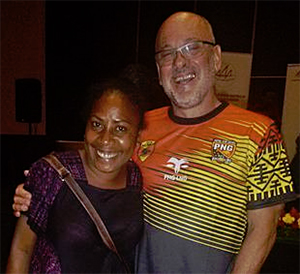 The interim Board of governance of the PBN comprises persons with impeccable connections to community and sustainability programs within PNG. A connection to the University of Canberra will be maintained by a Memorandum of Understanding with the PBN, recently signed by the Vice Chancellor Siani Deep, and Prof. Arthur Georges will be serving on the Board.

"It is terrific to see the Piku program move to a more sustainable footing, whereby it can diversify its sources of income, under a stable management structure lead by a winning team of PNG nationals", Prof. Georges said. "This will provide opportunity for so many to engage in community-led biodiversity conservation in the Kikori region, and who knows, perhaps on a much wider regional basis in the future."

Carla Eisemberg, an inaugural member of the Network from Charles Darwin University, is negotiating the first contract for the PBN with the petroleum industry. They have set aside substantial funds in the next financial year to support the initiative and to continue and expand its signature program in the Kikori River delta of the Gulf Province.

Carla is looking forward to the years ahead. "I am looking forward to work together with the Piku Program under the PBN banner. After 10 years of Pig-nosed turtle conservation in the Kikori Region, this new phase is about Papua New Guineans taking ownership of their scientific research and conservation. These are exciting times!"