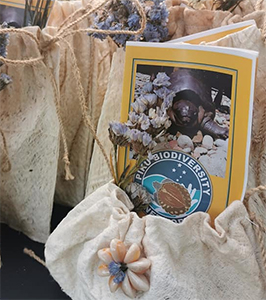 An exciting new NGO has emerged from the Piku program that has operated out of the University of Canberra since 2006.

The new NGO is called the Piku Biodiversity Network Incorporated (5-104750) or PBN for short. Its purpose is to promote and enable biodiversity conservation in Papua New Guinea through environmental education, community-led conservation and knowledge generation.

Director Yolarnie Amepou elaborated on the move "Our sponsors gave us the lead -- they said it is time for this program to transition to PNG leadership, and we agreed".

The Piku Biodiversity Network was formally launched this week at a gala event in Port Moresby. The event was attended by dignatories from all walks of life -- industry, government and the broader community. There was a strong press contingent present. 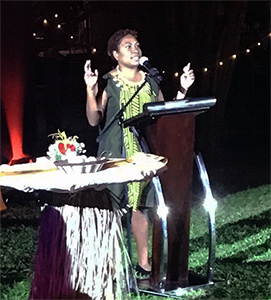 The proceedings began with a stirring speech from Yolarnie Amepou, Director of the new PBN, on the importance of providing opportunity for PNG nationals to engage in biodiversity conservation, and the role the PBN will play in achieving this.

Robert Aisi, Executive General Manager of Public and Government Affairs in ExxonMobil PNG, spoke on the importance of biodiversity conservation in PNG, one of the most biodiverse regions on earth, and the role that his organisation is playing in this, working closely with local communities.

Prof Arthur Georges from the University of Canberra gave a potted history of the Piku project -- how it has progressed from the very early days of Chevron and Mark Rose (now CEO of Flora and Fauna International), through the partnership between WWF and Oil Search in support of Matt Pauza in 2004, and the progression of the partnership with the petroleum industry, from Oil Search to PNG LNG to ExxonMobil PNG. 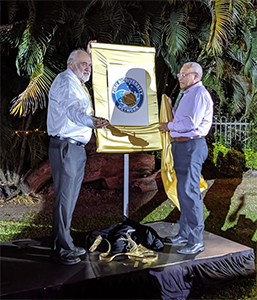 "I am excited about the PBN", claimed Prof Georges. "Why? Because the PBN sits at the intersection of industry, government at all levels, and most importantly the local communities. We live in times when the vaue of looking to government for solutions to the challenges we face is uncertain. They have been overtaken, at least in the democracies of the developed world, by a wave of popularism. Their focus is on meeting immediate demands, if they have any hope of being elected, and so seem unable to grapple effectively with the big issues requiring long term planning -- global warming, plastic pollutants entering our food chain, ocean acidification, dramatic insect declines causing concern over ecosystem collapse.

At the same time, we see people in large corporations planning ventures and infrastructure that will not be in place until after they are long dead. They are planning for the long haul. 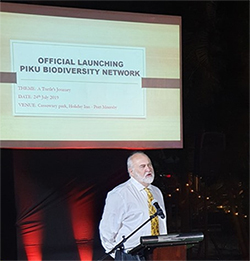 It may be that we need look more to large corporations such as ExxonMobil, Total and Oil Search, and not so much government, to take the long term perspectives needed to deliver solutions to the many challenges we face today. Sustained economic growth needs stable and sustainable communities, and a healthy natural environment. It makes good business sense.

"In this context, it is terrific to see the Piku program move to a more sustainable footing, whereby it can diversify its sources of income through partnerships with industry, under a stable management structure lead by a winning team of PNG nationals", Prof. Georges said. "This will provide opportunity for so many to engage in community-led biodiversity conservation in the Kikori region, and on a much wider regional basis in the future." 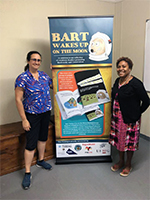 Carla Eisemberg spoke on the successes of the environmental education program, and in particular the series of childrens' books on conservation and sustainable management. Highlight of the evening was the launch of her new book, Bart Wakes up on the Moon, a story about the need to balance forestry practices with conservation. This is the fourth in a series of books for children on environmental issues like sustainability, invasive animals, waste management and now sustainable forestry. 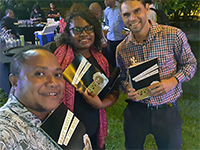 "I am looking forward to work together with the Piku Program under the PBN banner", said Carla. "After 10 years of Pig-nosed turtle conservation in the Kikori Region, this new phase is about Papua New Guineans taking ownership of their scientific research and conservation. These are exciting times!", she added. 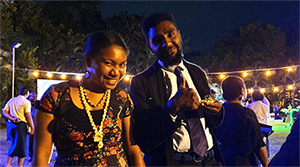 "It is so great to have the PBN emerge from the Piku program with such fanfare", claimed the PBN Director Yolarnie Amepou, in closing the formal ceremonies. She especially thanked the efforts of all involved in bringing the PBN into being and the launch, and especially Exxon Mobil PNG for its ongoing commitment and support. 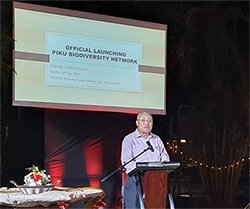 The Board of governance of the PBN comprises persons with impeccable connections to community and sustainability programs within PNG. Cathy Alex as Chair has a long history of engagement with the Kikori communities through the Community Development Institute (CDI) and now as the manager of Programs and Development with Advancing PNG: Women Leaders Network (APNGWLN). Dr Miriam Supuma has a long association with the tertiary sector via PNG Institute for Biological Research, and now works with Christensen Fund as the special advisor for Melanesia. Saina Jeffrey has worked closely with the Kikori Community in her role with WWF, and now works with JICA-CEPA. Valentina Kaman was instrumental in the formation of the PBN while with ExxonMobil PNG, but is now with Mineral Resources Development Company, PNG, as Manager-Legal. 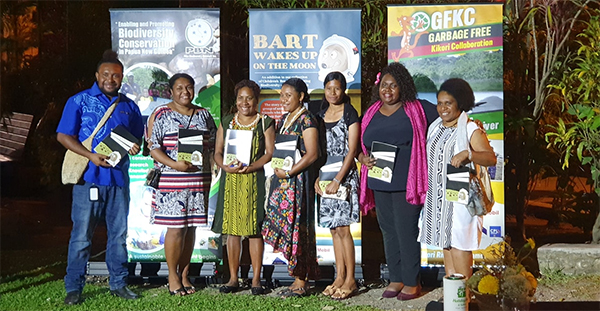 A connection to the University of Canberra will be maintained by a Memorandum of Understanding with the PBN, recently signed by the Vice Chancellor Siani Deep, and Prof. Arthur Georges is serving on the Board.

"We are already supporting a range of projects", Yolarnie explained. "It is not just about the pig-nosed turtle, but also frog conservation with Newcastle University, sharks and rays with James Cook University, cetaceans also with JCU, and a waste management intiative funded by Exxon Mobil PNG. We hope that many others will see advantage in running their projects under the PBN banner".

For further information, contact the PBN Director on yamapou2014@gmail.com or if in PNG, phone 70402594.