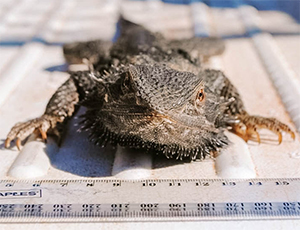 The sex reversed dragons are viable and fertile. This is not just a laboratory artifact, but occurs also in the wild and across a substantial portion of the natural range of the species.

The discovery of sex reversal in the wild opens the possibility of a rapid transition between chromosomal sex determination and TSD. Indeed, we were able to achieve such a transition in one generation in the laboratory, by breeding ZZ males (normal) with ZZ females (sex reversed). The resultant ZZ breeding lines lacked the W chromosome altogether, and sex of the subsequent generations was determined by temperature alone. 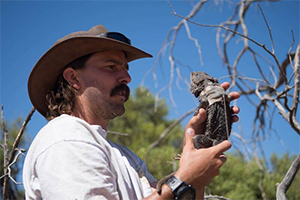 Sex reversal in the wild opens the possibility of similar transitions occuring in nature. Modelling of the evolutionary scenarios indicates that as the frequency of sex reversal increases under the influence of environmental temperature, one rapid evolutionary response driven by Fisher's frequency dependent selection, is to reduce the frequency of the Y or W chromosome in the population. Modelling this evolutionary process suggests that our study population of dragons at Bowra is on the precipice of loss of the W chromosome, should the climate warm further (see supplementary figure of our earlier paper, and modelling of Bassiana duperreyi dynamics predicts the loss of the Y chromosome at the highest elevations within its current range even under current climatic conditions.

The transition from chromosomal sex determination to TSD could be further accellerated if sex reversed females have an advantage over normal females, and studies in captivity suggest that this may be the case -- sex reversed females are larger, more fecund and bolder. Of course it is difficult to translate findings in the laboratory to fitness benefits in a natural setting. Being larger and bolder might appear to be of advantage in a captive setting, but expose the animals to increased risk (say of predation) in a natural setting.

To address this, PhD student Kris Wild examined the spatial dynamics of the central bearded dragon in its natural range at Bowra Wildlife Sanctuary managed by the Australian Wildlife Conservancy near Cunnamulla in central Queensland. This location has previously been identified as a hot spot for sex reversal.

Transitions to TSD require (a) low levels of dispersal and (b) high (>50%) rates of sex-reversal. Kris combined genotype-by-sequencing, identification of phenotypic and chromosomal sex, exhaustive field surveys, and radio telemetry to examine levels of genetic structure, rates of sex-reversal, movement, space use, and survival of Pogona at Bowra. 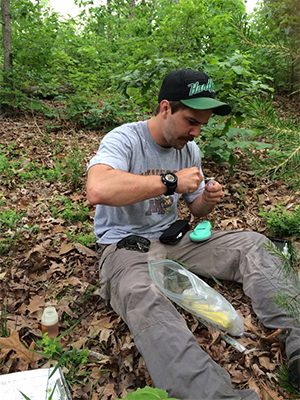 While there is a tendency to consider sex reversal as a transitory state in the evolution of TSD from genetic or chromosomal sex determination, our modelling has shown that populations where sex is predominantly determined by temperature can harbour residual cryptic sex chromosomes at low levels as an evolutionarily stable state.

The evidence and analysis presented by Kris, combining field work and genetic techniques, found low levels of population structure (Fst ~0.001) and a modest (~17%) rate of sex-reversal, and that sex-reversed and nonsex-reversed females have similar survival and behavioural characteristics to each other. His analysis indicates that this system is currently evolutionary stable. Kris admits that a gradual transition in sex-determining mechanisms in the future in a more fragmented landscape and as global temperatures increase is entirely possible.

Congratulations Kris on your paper that appeared today in Molecular Ecology.