Reptiles have an extraordinary variety of mechanisms to determine sex. The best candidate sex-determining gene in our model reptile (the Australian central bearded dragon) is the key vertebrate sex gene Nr5a1 (coding for the steroidogenic factor 1 SF1). There are no sex-specific sequence differences between nr5a1 alleles on the sex chromosomes, but the Z and W-borne alleles are transcribed into remarkably different alternative transcripts. In our article, that appeared in PNAS this week, we propose that altered configuration of the repeat-laden W chromosome affects the conformation of the primary transcript to generate more diverse and potentially inhibitory W-borne isoforms that suppress testis determination. This is a mechanism for vertebrate sex determination, in which epigenetic control regulates the action of a gene present on both sex chromosomes. 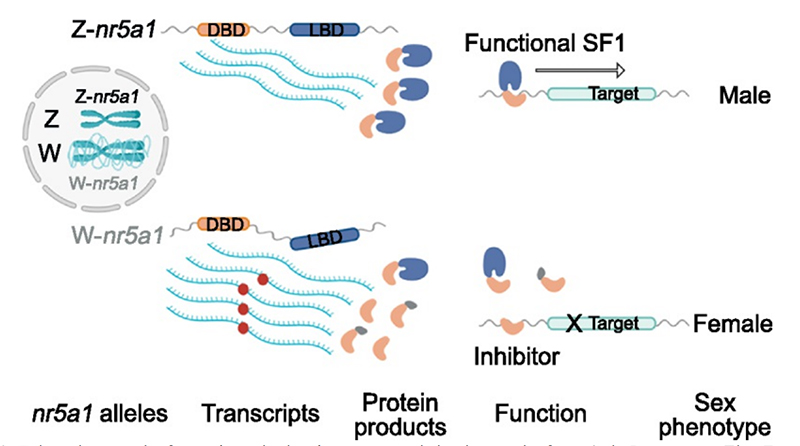 Sex determination is a fascinating topic for a number of reasons. First of all, sex is such a fundamental trait of individuals, exerting a great influence on their development and life history. Second, it is a dichotomous trait with individuals undergoing normal development to have either testes or ovaries. This has some interesting implications, because the regulatory processes leading to the development of the male or female gonadal phenotype need to be highly cannalized. Phenotypes half-way between the two are either dysfunctional or lead to highly compromised fitness. Thirdly of course, we are just fascinated by sex and all the behaviours that accompany procreation.

Equally fascinating, for scientists at least, are the mechanisms by which the developmental decision is made to be one sex or the other. In humans it seems quite straighforward. We have sex chromosomes. Males have XY sex chromosmes and females have XX chromosomes that can be clearly differentiated under the microscope. The sex of our offspring are determined by whether or not they recieve an X or a Y chromosome in the sperm to complement the X chromosome in the ovum. The Y chromosome carries a male determining gene Sry. Expression of the gene Sry triggers the self-upregulating gene Sox9 which drives a cascade of regulatory processes ultimately leading to the formation of a testis. Elements of this cascade cross-suppress the expression of genes responsible for the development of an ovary. In the absence of Sry, development leads to an ovary.

It is not like this for all animals and indeed, there is an astonishing array of sex determining mechanisms in vertebrates. The end product, testis or ovary, and the regulatory processes of sexual differentiation leading to these organs are highly conserved, but the process by which the decision is made on which sex to produce is not.

In reptiles and fish, it is all over the place with a wide array of sex determining genes so far identified, exerting their influence through dominance as in humans or dosage as in birds. And the mechanisms of sex determination can be epigenetic or quite subtle or even cryptic. The sex of the fish Fugu for example is determined by a single base difference in the DNA -- so remarkable that this has actually been found. 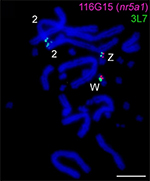 In our PNAS article, which appeared this week, we show that despite both the Z and W chromosomes having a near identical copy of a candidate sex determining gene NR5A1, this gene transcribes to yield quite a range of RNA isoforms. In the male ZZ individuals, three primary isoforms are generated, of which two are not truncated and likely to be functional. Female ZW individuals present a much more diverse array of isoforms, 16 in all including the 3 in ZZ individuals. Most of these isoforms are truncated to lose the ligand domain and with it their primary function, but retain the DNA binding domain. The production of these modified isoforms opens the possibility of lower activity of Nr5a1 in the females overall, but also the possibility that the truncated forms will interfere with the functional versions of the isoform in females.

Because the gene Nr5A1 has a critical role in male sex determination in vertebrates, by enabling the upregulation of Sox9 and the resultant male cascade, its lower efficacy in the female ZW individuals may be the sex determining process.

The near identity of the genomic sequence of NR5A1 and the differential diversity of resultant isoforms opens the tantalizing proposition that sex in the dragon is driven by the impact of differential chromosomal conformation, perhaps arising from the different repeat content of the Z and W chromosome.

How neat is this?

You can read more by downloading the full article, which is open access.