There is no vertebrate group facing greater survival problems today than turtles. Turtles saw the great dinosaurs come and go and are now facing their own extinction crisis -- John Behler. Scientists have now revised their assessment of the 25 turtles most at risk of extinction, to increase the imperative for governments to take action. Two Australian freshwater turtles are on the list.

Of the 356 species of turtle and tortoise known to science, 41.6% are listed as Vulnerable, Endangered, or Critically Endangered by the IUCN. Among vertebrates, only nonhuman primates, with about 61% of species threatened with extinction, are in a more precarious state.

Tortoise and freshwater turtle populations are today under intense pressure from humans. Their populations are being extirpated by development, agriculture, and land and water pollution. They are eaten along with their eggs, collected both by people whose societies have done so for centuries, and to feed current, larger scale tastes for turtle meat and eggs. In some parts of the world turtles are used in traditional medicines. And the pet trade, both legal and illegal, severely threatens many species.

Two Australian species have unfortunately made the list. The Western Swamp Tortoise has long been recognised as critically endangered. As a consequence of massive habitat loss and despite the creation in 1962 of two small nature reserves encompassing all known habitat fragments, the wild population of Pseudemydura umbrina, a slowly reproducing ephemeral clay swamp specialist, dropped from over 200 in the 1960s to fewer than 30 individuals by 1987. Together with 17 captive individuals, which did not breed, the world population was below 50. A rescue operation begun in 1988 established a successful captive breeding project through an ecophysiological approach, taking into account the species’ extreme seasonality. A recovery program over the last three decades allowed the last tiny self-sustaining wild population in one of the reserves to increase slowly through predator exclusion and acquisition and restoration of adjacent habitat. Through reintroduction of captive-bred juveniles and supplementation of some swamps with water during dry winters, the second natural population was also recovered. Together with conservation introductions of captive-bred juveniles at two additional protected sites north of its known range, the overall wild population increased by about ten-fold since the 1980s, but since juveniles take 8–15 years to reach maturity, the wild adult population still hovers around 50. Natural recruitment is now occurring in all populations. The species remains under severe threat from introduced predators (foxes, rats, pigs), poaching, incompatible surrounding land uses, as well as stochastic events related to climate change: drought, increasing aridity, drying swamps, and bushfires. Based on integrated biophysiological and hydrological modelling, colonization in two sites on Western Australia’s wetter and cooler south coast commenced in 2016, making P. umbrina the first vertebrate species to be deliberately relocated to novel areas because of climate change. 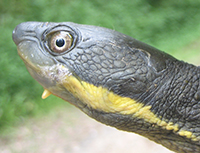 The new Austalian addtioin to the list is Myuchelys georgesi. This, the Bellinger River Snapping Turtle, is a distinctive lineage of chelid turtle that is restricted to a small coastal drainage, the Bellinger River, in New South Wales, Australia. The species is threatened as a relictual lineage restricted to an exceptionally small range (35 km linear range). It is also threatened by substantial changes in land use and clearing in the Bellinger catchment, including the riparian zone, leading to instream changes that favor the establishment of an introduced competing species, Emydura macquarii. This species, recently introduced to the Bellinger, hybridizes with M. georgesi, with the risk of genetic pollution and loss of genetic identity. In 2015, a disease swept through the range of M. georgesi and killed all adult individuals in the population, but left the introduced Emydura macquarii unaffected. Known surviving adults of M. georgesi currently reside in an assurance colony maintained by Taronga Zoo, in Sydney, which has had some success in breeding. As a result, in 2016 M. georgesi was listed as Critically Endangered under the Australian Environment Protection and Biodiversity Conservation Act. With only juveniles remaining in the wild, and uncertainty as to how they will be affected by the disease when they reach adulthood, the species is considered under imminent threat of extinction.

The above are extracts from the book. For more information on the Top 25, download the publication here, or purchase a hard copy as this will soon become available.

Let us hope that this publication will keep the plight of turtles and tortoises in trouble forefront in the minds of policy makers and managers, so that we are not faced with reading more desperately sad obituaries like that of the Pinta Island Giant Tortoise Chelonoidis abingdonii, for which the last known specimen, Lonesome George, passed away on June 14, 2012.